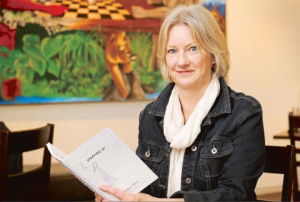 SHE’S gone through a lot of “adverse stuff” in her lifetime, but Margaret Hiatt, 61, has now found her inner strength and is sharing it with others.

She was 20 when she first visited Mildura on her honeymoon. Six months after that she was wid- owed. “A very traumatic road accident resulted in the death of my hus- band Pat,” Margaret says. The tragedy sent her into a 30- year period where she had no real career goals or aspirations.

“I wasn’t encouraged by my family and growing up in Nathalia in northern Victoria, there were few opportunities for further career de- velopment,” Margaret says.“In my mid twenties I moved to Melbourne with Michael, the man who was to be my second husband.

“We had our own clothing stores and I was involved in the business while raising our two sons, Marc and Marty.” A few years later, Margaret was divorced and continued to raise her two boys as a single mum, returning to the workforce when they both started school.

“I started work as a bank teller and in the late 1990s I was promoted to bank manager in subur- ban Melbourne.“After working in a few more suburban bank branches, I was chosen for a management position in Collins Street. “Throughout this time I lived with low self-esteem and low self- worth. “Although I had one of the highest performing branches in my region, I felt like a ‘square peg in a round hole’ and questioned what I was doing. ”From Collins Street, Margaret was promoted to the management role at the Mildura branch of the Westpac bank in 2006. “I didn’t know anybody when I moved to Mildura and spent a lot of time by the river and enjoyed my new-found love of early morning rowing. After two-and-a-half years working and living in Mildura I was retrenched.

“A daunting prospect at 57, but as I now know, positives do come out of negatives,” she said. Soon after that setback, Margaret decided to up- grade her qualifications with a view to applying for further management positi0ns. “What those pieces of paper did was to give me confidence,” Margaret said.

“As it turned out, I started my own business as a coach, and mentor, supporting others to build confidence and self- esteem – in turn, supporting them to build their businesses.” Margaret flew into Mildura recently “as she often does”, to facilitate another of her public speaking workshops.

“I’ve gone from having a fear of public speaking to being a key note speaker travelling Australia wide to give my presentations,” she said.

Margaret is also employed by Victoria University working with people to gain qualifications.

“My business focuses on ‘mind- set’ – if you truly believe you can, you can,” she said. “I’m passionate about helping people overcome their fears, I love what I do and I now feel valued.

“Since establishing and building my business I’ve never been happier.

“I have a dream life and I’m grateful for the experiences I’ve had that I now draw on.

“Supporting others making positive and rewarding changes in their lives is my business.”