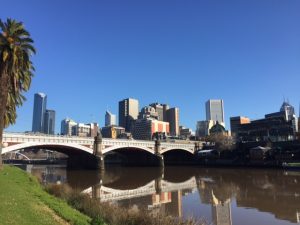 What is that feeling of awe when you are standing in the middle of a city looking up at old or very large buildings?

I still have a particular feeling when I wander through Melbourne taking photos and generally losing myself in the busyness of the city even though I live here and spend time most days in and around the city.

Have you had a feeling that you cannot explain when you are in a city looking up at buildings?

Considering the building are made of concrete or stone, what is it about the fact there is a feeling that is somewhat tricky to describe?

Is it the grand scale of the buildings?

Is it the age of the buildings?

Does the feeling differ with a building that is older?

Is it that the building took so long to build? Although the buildings that are going up in the city right now seem to go up in no time at all!!

The feeling I have is even more intense when I’m in Sydney wandering the tiny one-way streets and looking at buildings built out of stone. And the feeling is even more intense again when I am in cities in Europe where the building are much older again and to my mind have more character. Considering the buildings are mostly concrete and the older buildings stone, they have no feelings they share with us there is a feeling they provoke within us.

I’ve also experienced a similar but more intense feeling when I’ve been walking near or sitting on rock that I know is millions of years old. It can be rock that is weatherworn or rock that looks like it has been thrust up from the inner earth and is jagged and rugged. These rocks have infinite time scales and that alone for me provokes a feeling that I both love and find hard to articulate.

The ocean also provokes the same feelings. It is so big and the waves keep rolling in no matter how long we stand and watch there is a power and consistency that is beyond belief.

Spending time looking up at city buildings, sitting on rock in the open country or by the sea, or standing looking out to sea is something that takes me away from the day to day thoughts of my business, I guess in a way that sport or a hobby may do for some people. Although I think just being, in the environments I have described is a way of bringing a certain reality to the scale of our life. We are small by comparison. We are here for such a short time in the grand scheme of the earth, the world and that alone can bring some reality to our life.

Often we have the desire to get away from the day-to-day busyness of our lives and just don’t make the time. We can easily justify keeping busy and hanging on to all the things we believe we need to do in a day and in our business.

I’m suggesting you make some time and take some time to just be. Look out at the sea or sit on a rock and allow yourself some space in your mind to let go and let in some thoughts about what you are here on earth for. Consider how long you are here compared to the sea, the rocks, the earth and on an even more grand scale the universe. Think about the legacy you are going to leave. Think about the grand scale of the sea or the rocks and let that alone provoke thoughts you may not have considered in the past.

By taking time out, you will be more productive when you come back to your work or business.

Take time out from your busy life.

Let your thoughts drift and flow.

Allow a space for complete nothingness.

It can be in these times that new and different thoughts and possibilities come to you.

Recognise that you are here for such a short time so make the most of every minute.

Allow yourself the time to contemplate and plan by first emptying your mind of the clutter that we continually live with.

Allow thoughts and happiness in so that you can make the most of your precious life.

You have one life.

Make the most of every minute.

Allow yourself time to just be.