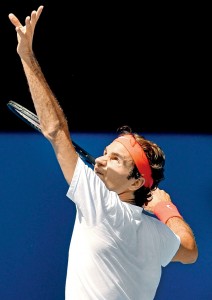 A few nights ago, the conversation over dinner turned to tennis and in particular Roger Federer. Most likely it was because it’s not all that long ago we were all watching him in Melbourne playing some stunning tennis. In particular we were talking about serving. So to set the record straight I am not a tennis player, a fan, yes.

Roger is currently ranked no 8 in the world and has held the number 1 ranking for 302 weeks. He is the only man to reach at least the semi’s in 23 consecutive Grand Slam tournaments . . . I could go on, but I’m sure you know about this or you get the picture. He is pretty darn good and there are many more records held by him.

To be so good there must have been a lot of practice over the years and a lot of focus and consistency. If you watch him play you’ll notice the same movements over and over again. The same routine bouncing the ball before each serve, the same motion for forehands and backhands.

Roger is known for one of the smoothest and most accurate serves in the sport. He developed a powerful serve that is balanced and rhythmic by establishing a pattern that works well and repeating it. He doesn’t rush the serve, he just repeats the motion

Each serve is repeated no matter what the score. It could be the first of the match or it could be Match Point. The ability to keep the emotions under control and treat each serve with such focus can only come about with practice, both in the body and the mind.

As we were talking over dinner I was reminded that we can apply this to many things in our lives. Get a system that works exactly how you want it to work and repeat. Importantly, practice, get feedback, and practice some more until your mental attitude is such that you can perform “the thing” repeatedly with amazing accuracy and flexibility when you know it’s required

This could be used to structure and build your presentation skills and also your business.